Mundaun is comfortably the most interesting horror game I’ve played in years. A pencil-drawn Swiss folktale that’ll linger in your mind long after you’ve finished playing it, it’s like little else I’ve experience in horror gaming. 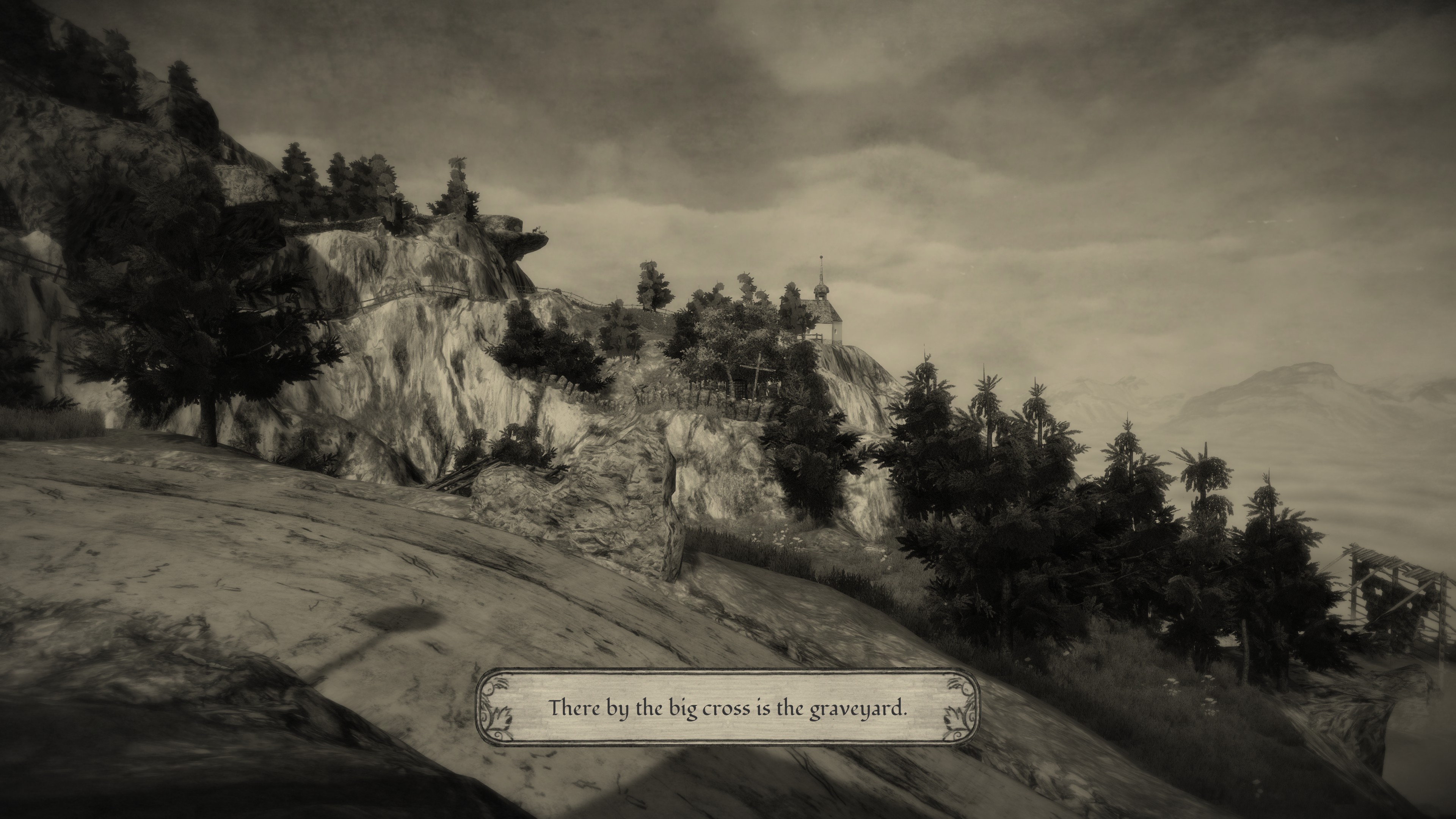 You play as Curdin, a young man who returns to the farm of his grandfather, Flurian, after receiving a letter from the local chaplain stating that Flurian died in a barn fire. The letter explains that Flurian has already been buried, and there is no need for Curdin to visit. Which, obviously, has the opposite of its intended effect, with Curdin quickly boarding a bus to the mountainside hamlet where Flurian’s farm is based.

Upon arrival, it soon becomes apparent that Flurian’s death was not an accident, while there are mysterious and sinister ongoings beneath the shadow of the mountain’s twin black peaks. What exactly is the chaplain hiding? What’s the deal with the little girl who seems to appear wherever Curdin goes? And who is the strange old man shadowing Curdin’s footsteps? 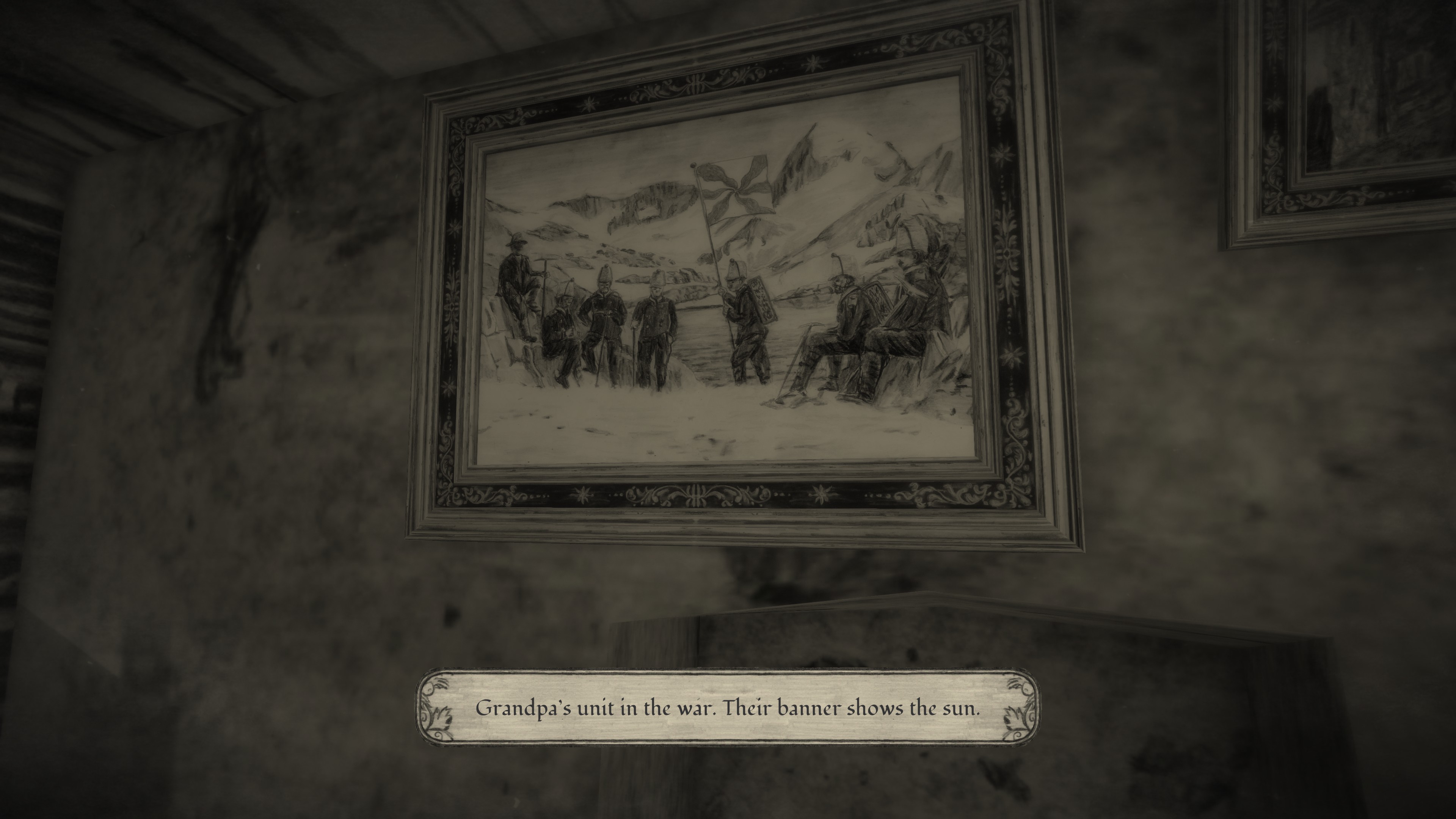 From here, Mundaun spins a delectably eerie yarn that sees Curdin slowly ascend the mountain to unravel the secret at its dark heart. It’s a tale that risks alienating the player in the opening, however, due to a somewhat unsubtle element to the script. Curdin has an annoying tendency to state the obvious, such as when he overtly declares how odd the chaplain’s letter is during the opening bus ride. Indeed, arguably Mundaun’s main flaw is that the script needs paring back, lacking confidence in the player’s ability to figure things out for themselves.

It’s an especially odd flaw given how good at visual storytelling Mundaun is. As you’ve probably noticed, the game looks incredible, and unlike anything I’ve played before. This is because every texture in the game has been painstakingly drawn in pencil, from environment materials to in-game objects to character models. The detail and variety Mundaun squeezes from its monochromatic style is remarkable. Initially, it uses light stencilling to illustrate the early, more pastoral environments, before switching to thicker, darker lines as you ascend the mountain to a stark and craggy plateau dominated by a glacial lake. Some of the vistas on offer are truly breathtaking, doubly impressive given basically everything is drawn with the humble pencil. 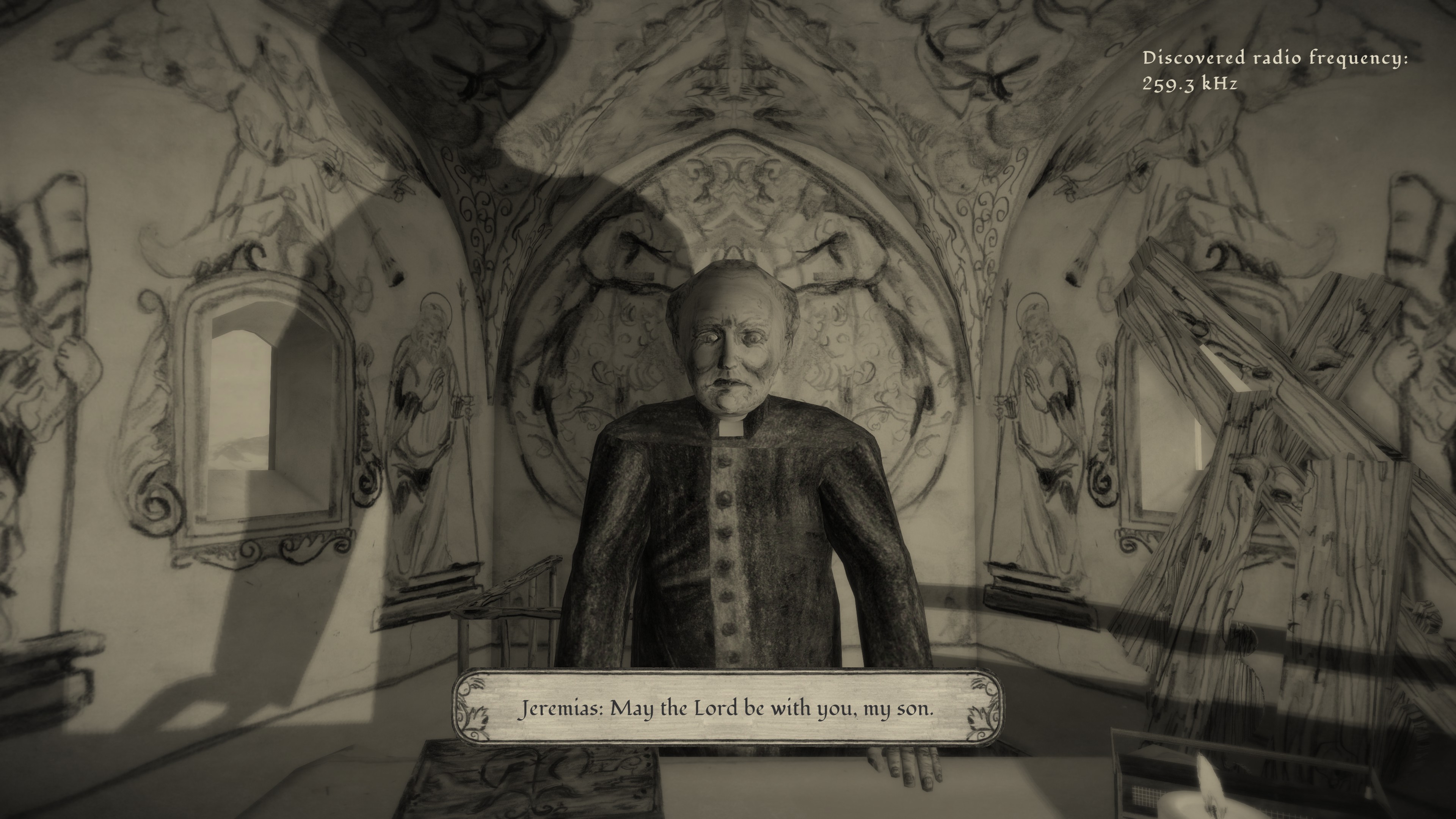 Yet while the game’s art is superb, it isn’t what makes Mundaun great. That is a consequence of a far subtler balancing act, between the mundane and the surreal, between exploration and puzzle solving, and between mechanical variety and holistic storytelling.

Let’s discuss the last point first. Mundaun is a surprisingly mechanically rich game. Alongside the puzzle-solving, the game features stealth, combat, driving, and even a side-system dedicated to the art of brewing coffee. More impressively, Mundaun elegantly threads all these different ideas together. The driving, for example, revolves around a hay-collecting truck known as the Muvel. It’s a characterful little vehicle, complete with its own static-y radio, interactive headlights, and a key that you need to turn manually to start the engine. It’s the ideal companion to Mundaun’s miniature open world. 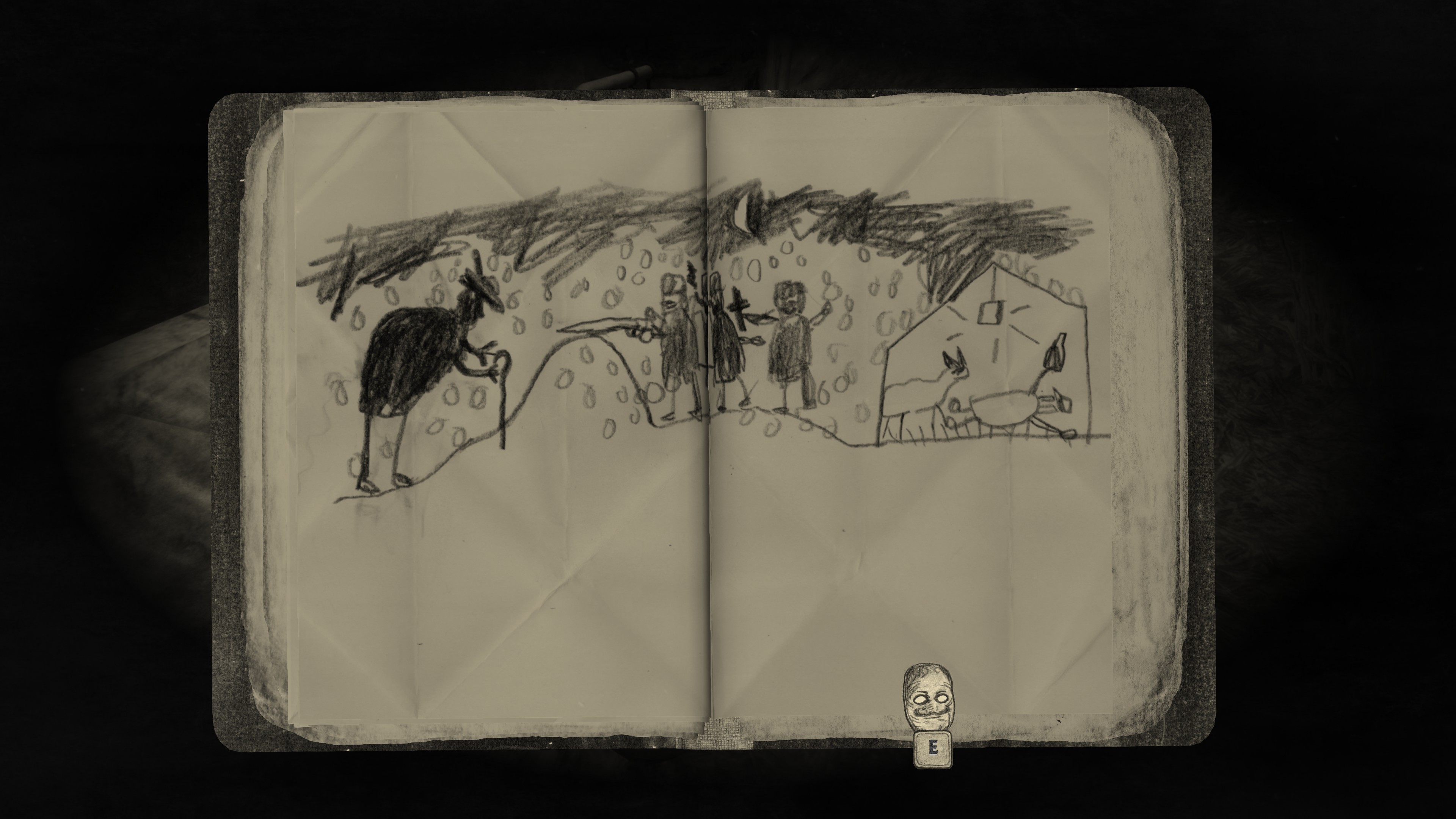 Combat is similarly low-key and functional, limited to prodding the occasional enemy with a pitchfork, or exchanging long-distance potshots with shadowy figures on the highest slopes of the mountain. Indeed, I was concerned when Mundaun shoved a gun in my hand, that it would undermine the atmosphere the game had so painstakingly built. But if anything, the sporadic gunfights in the snow only add to the game’s strangeness. And you can choose to avoid direct engagement, relying instead on sneaking and running depending on what best suits your current situation.

This isn’t a game that presses hard on your fight-or-flight response. There’s little in the way of jump scares or anxiety-inducing chase sequences. In fact, there are long stretches where the game trundles along almost pleasantly, as you pootle about your grandfather’s farmhouse making coffee to boost your character stats, or collect hay in the Muvel to transport up the mountain. But these activities are always accompanied by a constant, underlying sense of eeriness, generated in large part by the sublime soundtrack, which uses a lot of distorted ambient soundscapes reminiscent of Hildur Guðnadóttir’s soundtracks for Joker and the Chernobyl miniseries. 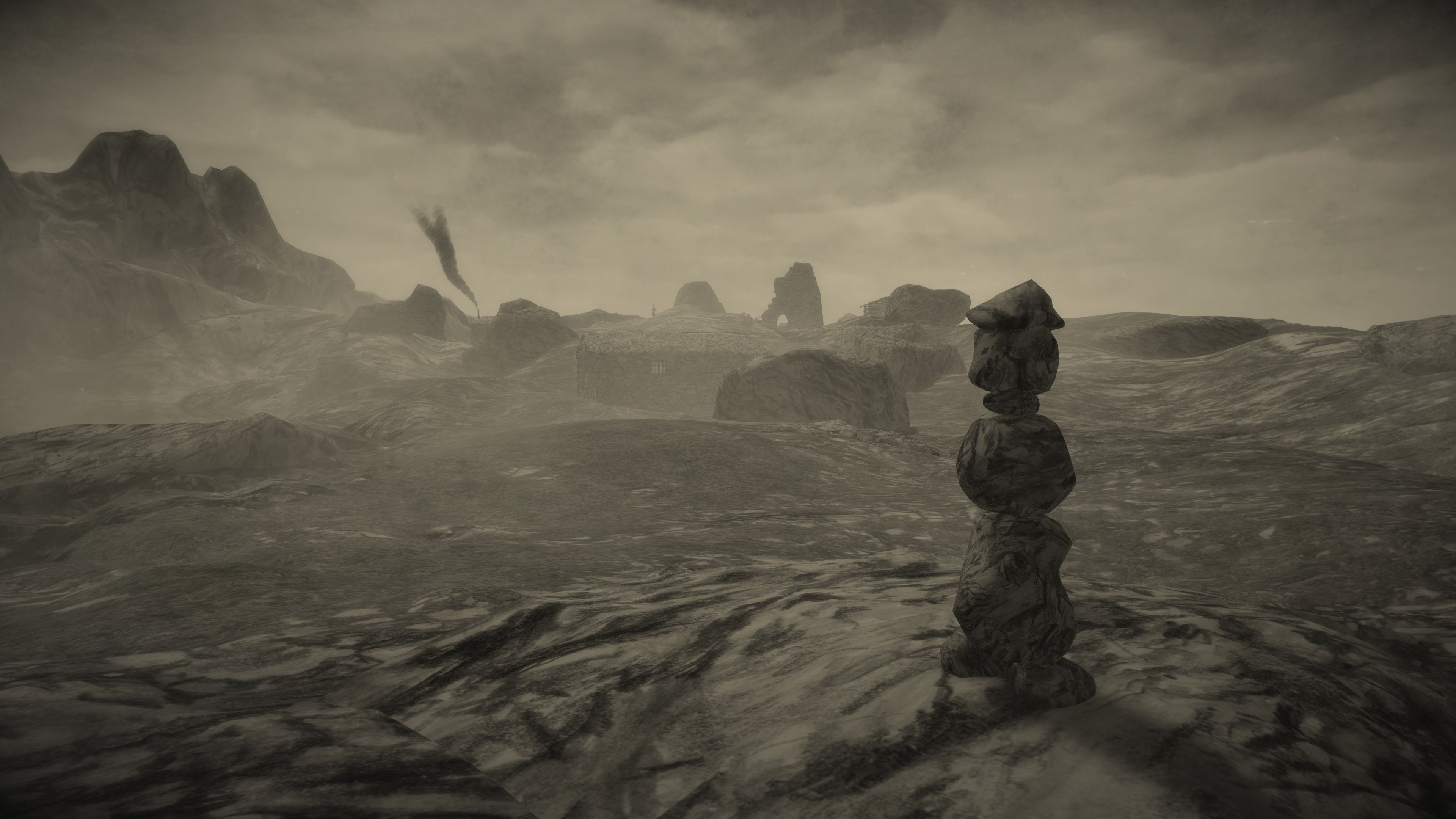 So you’ll gently go about your business when Mundaun abruptly segues into some utterly surreal and unsettling scenario. You’ll walk into a meat-curing shed and be confronted with a hanged man who, still alive, helps you complete a puzzle involving musical goat carcasses. You’ll turn a corner on the plateau and suddenly be confronted by floating men wearing baskets over their faces, who shoot bees at you from a distance. One of my favourite sequences involves exploring a labyrinthine bunker where an old army acquaintance of your grandfather dwells. Following the spectres of old soldiers through the concrete maze, you can’t tell whether the bunker is genuinely this elaborate, or if the strange force that lurks in the mountain is stretching reality again.

In this way, Mundaun beautifully blends the everyday and the supernatural, to the point where the two are inextricably intertwined. It’s less “What the hell was that?” And more “What the hell is that?” as you try to wrap your brain around the latest bit of inexplicable imagery Mundaun has casually dropped at your feet. 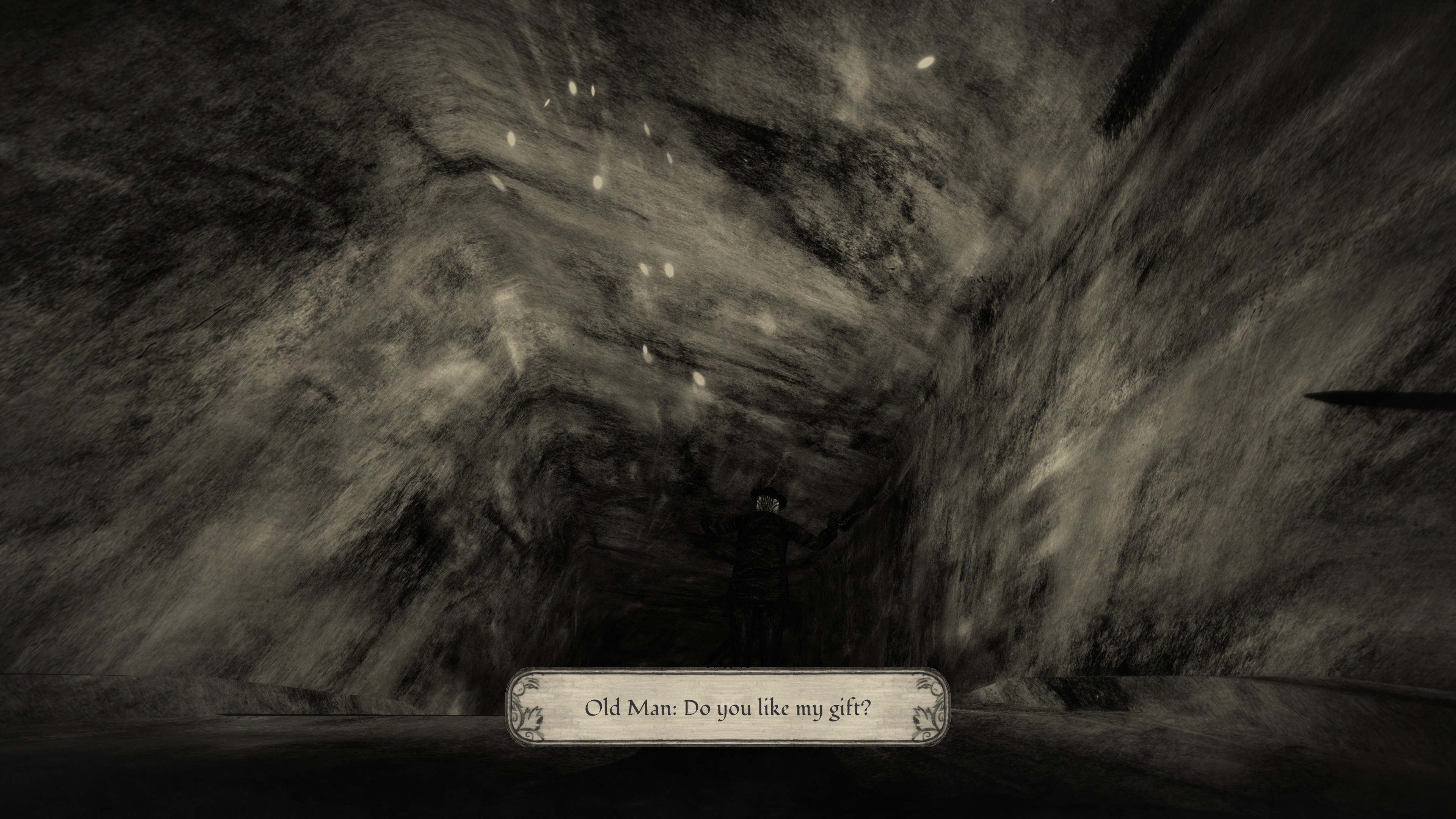 As you can probably tell, I’m extremely fond of Mundaun. There’s also relatively little wrong with it. As I mentioned, has a tendency to overexplain things, although this becomes less of an issue as the game opens up. The puzzles are largely well-balanced, although one that involves collecting honey toward the midpoint is overly fiddly for my liking. Finally, for a game that’s heavily about drawing and pencil-art, your journal is oddly under-utilised. The game implies it will be an important tool in your puzzle-solving, and while you do collect a fair number of documents in it, it ultimately plays minimal practical role in your exploration.

Ultimately though, these are minor gripes. I’m completely bowled over by Mundaun, easily the most accomplished and fascinating horror game I’ve played since Frictional’s SOMA, a timeless spot of rural folklore delivered with incredible style and a keen understanding for how to get under your skin. Play it.