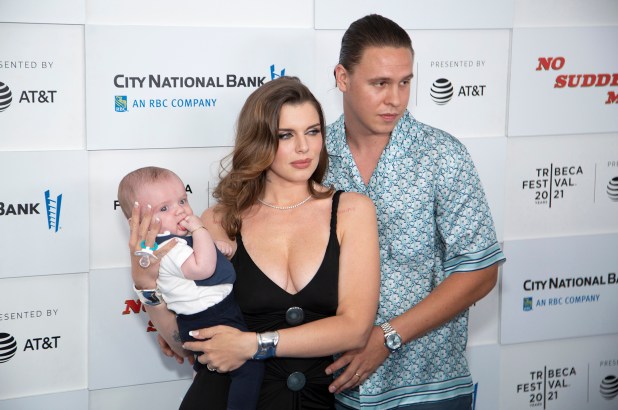 Julia Fox believes that she was too harsh on her ex, Peter Artemiev with whom she has a son, Valentino.
Getty Images

Julia Fox has apologized to ex Peter Artemiev for calling her son’s father a “deadbeat” and an “alcoholic.”

“All that I want to say is “I’m sorry” on Fox’s Friday episode of her podcast hosted by Niki Takesh. “You are not a deathbeat, I know you are not and I know you didn’t try to see [son], Valentino. It was that you weren’t trying to view me .”

The actress said that she wrote the social-media rant in which she dragged her ex around during the holidays, after not hearing from him for “a month or more”.

” Everyone had COVID.” she said, “I had no help whatsoever and my friend went out and saw Peter out. Peter was saying something along these lines: ‘That bitch won’t let me see his son’ and when that was relayed, my blood boiled.

According to Fox, she attempted to get in touch with her child’s father several times, which made his alleged statement even more infuriating.

Today however, the actress spoke out about “evening the field” with Peter because of his aversion towards stardom.

“He is just so not interested in this life,” she said. He doesn’t care about it. He’s like the chillest, most genuine, down-to earth guy I know.”

Fox shared details about their early relationship. They met prior to her star-making role in “Uncut Gems”, but they didn’t start dating until months after Artemiev was single again. The couple got married in Las Vegas after a month of being together.

Unfortunately, it seems that the birth of their son Valentino in January 2021 crystallized nascent issues in the relationship.

“He didn’t step up in the way I expected,” she said, explaining that her experience with childbirth had changed her.

“He seemed to be trying to deliver my son in a strange way.”

The exes seem to be in a better place, as baby Valentino spent time with his father while Fox recorded the podcast.